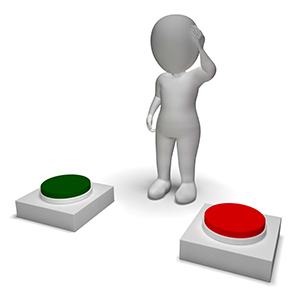 SpiritualPractices-ResearchThere is a compelling amount of research on the power of choice. Scientists the world over agree we cannot not make a choice. Essentially, we are wired for choice. And not only are we wired for choice, we are wired to make every choice our choice and no one else’s! And we owe this bit of failsafe choice-making to what we call Bereitshafts Moments.

This extraordinary human trait – and telling human trait- was first recorded and reported in 1964 by Hans Helmut Kornhuber and Lüder Deecke at the University of Freiburg in Germany. In a series of experiments, Benjamin Libet studied the relationship between our conscious experience of volition and the moment the Bereitschafts Potential ‘kicks in.’ He found that the Bereitschafts Potential starts about 0.35 seconds earlier than people report conscious awareness that they feel the desire to take some kind of action. He found that people were able to prevent an intended action at the last moment by consciously vetoing these actions.

What Does This Mean to Us?

Before anything we think gets translated into actionable behavior, we have the inborn opportunity to veto any and all of our intended actions. Isn’t that incredible? Before we actually criticize someone, we can stop ourselves. Before we drink that beer, we can put the bottle down. Before we steal the CD, we can decide to leave it on the shelf. Before we say something hurtful, we can censor the indignity.

We are reminded of the power we have over our thoughts and actions in Genesis 1:26. We’re citing it from its usual literal meaning first and then following it up with a metaphysical perspective in order to corroborate the awesome nature of the Bereitschafts Potential.

According to the Genesis account, we are given dominion over the fish of the sea, the fowl of the air, the cattle, and over all the earth, as well as over every creeping thing that creepeth upon the earth.

When we use a metaphysical interpretation of this scriptural passage, the animals, fowl, creepy things and earth stand for traits, habits, and characteristics within us.

Seriously — Our dominion is guaranteed by each built-in 0.35 second Bereitschafts Moment which is constantly available to us before we take any kind of action. We never have to abdicate our power. We can choose how we will respond to anything or anyone!

Honor your 0.35 second gift. Use it to master the art of living!

2 thoughts on “A Bereitschafts Moment”