Do You Believe in a Helicopter God? 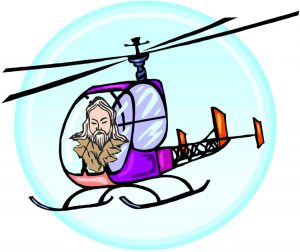 The concept of a helicopter God comes from a parenting industry term called ‘helicopter parent.’ Helicopter parents got their ‘hovering license’ because, like helicopters, they hover overhead. The same thing goes for the belief in a micromanaging God who supposedly hovers overhead in order to watch every move we humans make, control our lives, and intervene on our behalf.

We’re going to ‘hover’ over helicopter parenting first and then share our insights about the unfortunate near-sightedness of a mythical helicopter God. As we compare the two concepts, we invite you to draw your own conclusions about how each affects your children’s and your own soul growth.

A Quick Look at Helicopter Parents (for comparison’s sake)

People think this is a new concept, but the helicopter metaphor for over-parenting appeared as early as 1969 in the bestselling popular psychology book Between Parent & Teenager by Dr. Haim Ginott. The book mentions a teenager who complains: “Mother hovers over me like a helicopter…” 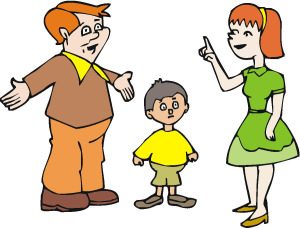 Helicopter parents typically take too much responsibility for their children’s successes and life experiences. This type of overbearing fussiness means being involved in a youngster’s life in a way that is pushy and over-controlling, over-protective and oppressive, over-perfecting and over-inflated. This excessive, over-shadowing parenting style may produce the short term academic and behavioral results parents want, but in the long run the excessive hovering destabilizes the parent-child relationship.

Providing disproportionate assistance for homework and school projects is creating overly-dependent, subservient children. Practices like calling your children each morning to wake them up for class and complaining to their teachers and/or professors about their grades are disempowering. Becoming long distance proxied summer camp officials to monitor the paid summer camp officials’ treatment of your child is not the way to build your child’s social responsibility skills.

We’re not ‘Simpson’ fans, but for those who are, we’re reminded of the ‘Father Knows Worst’ episode of the 20th season of The Simpsons. It originally aired on the Fox Network in the United States on April 26, 2009. In the episode, Bart and Lisa are struggling in both their academic and social lives at school and Homer becomes a helicopter parent. The whole episode is about too much of Homer’s presence. He dotes obsessively and over-steers, over-protects and over-controls, and becomes pushy to a fault, creating disastrous results!

However you slice it, helicopter parents put their own emotional and narcissistic needs ahead of the developmental needs of their children. Social psychologists have found that inappropriate, anxiety-driven parenting tactics not only compromise children’s autonomy, confidence, mastery, and personal growth, they often reflect a highly judgmental attitude by parents, who praise their children when they do well, but withdraw affection when their ‘protégés’ don’t measure up.

Okay. Okay. That’s the extent of our helicopter parenting perspective. We hope our treatment of the concept of a helicopter God which humankind invented will be as unhelicoptery and non-judgmental as we can make it! However, it will become obvious that we aren’t fans of either.

We don’t want to sound like overprotective ministers, but we invite you to let the concept of a helicopter God (a drone God in today’s parlance) flutter out of your consciousness. There never has been a helicopter (drone) God. It’s the fig newton of a patriarchal, old school, religious mindset. A helicopter God (anthropomorphic God, drone God) is the foundation of mainstream religious traditions around the world. It has been reinforced through mistranslated and misinterpreted scriptures, perpetuated by fossilized doctrinal edicts, and preserved by millions of well-intentioned — although unenlightened –ministers in pulpits throughout America and beyond.

Remember the often quoted mainstream religious story about God sending two boats and a helicopter? For those who somehow missed the story, it goes something like this: 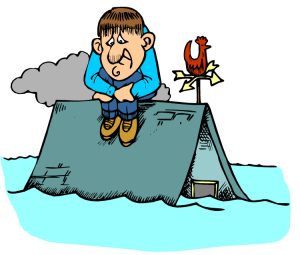 “The Lord will save me,” he tells them.

A short time later the river is up to his front porch. Some folks come by in a boat and tell him to hop in and they’ll take him to safety.

“The Lord will save me,” he tells them.

The water rises above the first floor and the man has to climb on his roof. The National Guard comes by in a boat and begs him to come with them.

“The Lord will save me,” he parrots.

The waters keep rising and the man is clinging to his chimney. A helicopter appears and lowers a rope, but he refuses to go, telling them, “The Lord will save me.”

Finally he is standing on top of the chimney and the river is still rising.

The sky splits open and a HUGE voice booms out… “I sent two boats and a helicopter … What more do you want?”

This cute little story epitomizes the helicopter (anthropomorphic, drone) God concept. It reinforces the unfortunate concept of a God ‘out there,’ separate from us, who is believed to micromanage human affairs. It is based on the belief of a God who punishes sinners and rewards believers – and, as this story implies, sometimes there is a disconnect with that ‘hovering’ God when good people are hurt, lost, sacrificed, and abused!

Things, like rescue attempts from housetops, seem to fall between the cracks when we believe there is distance between us and the Creator. People have been ruthlessly programmed through centuries of mainstream religious teachings to look ‘out there’ for answers. They have been taught to see authority figures (clergy, priests, popes) and conventional institutions (churches, synagogues, parishes) as intercessors to speak in their behalf to a god ‘out there.’

There are many scriptures used to support this belief. The three that follow are representative of the mainstream religious Helicopter God concept:

“As an eagle stirreth up her nest, fluttereth over her young, spreadeth abroad her wings, taketh them, beareth them on her wings” (Deuteronomy 32:11).

“How often I have longed to gather your children together, as a hen gathers her chicks under her wings” (Matthew 23:37-39).

We believe a MetaSpiritual interpretation of these verses all reflect the longing of our human self to be consciously one with our Higher Self, and that the gifts of our 12 Powers are always present to give us the inner guidance and resources to manifest from the Field of Infinite Potential.

Let Go of the Helicopter God

As you continue to unfold your spiritual nature outside of the limited perspectives of organized mainstream religions, you come to understand that there is no external, anthropomorphic force that acts upon you; that guides you if you’re dutiful; that heals you instead of someone else, or heals someone else instead of you; that rewards believers, but punishes sinners; that sacrificed His Son to purge the world of sin, but then allows humankind to sin anyway.

These are established Helicopter God views. But in the principles of universal unity and oneness as taught by physicists, neuroscientists, epigeneticists, biologists and metaphysicians, you are not a creation of God, molded and shaped and set on the path of life ‘down here’ in skin school. You are the Force or Presence of the Eternal Presence we call God expressing Itself as you in human form.

The mainstream religious God as the potter, the watchmaker, the chessmaster, the punisher of sins, the white-bearded Zeus-like author of the Ten Commandments has lost its relevance and believability for those who consider themselves to be more spiritual than religious. As we’ve mentioned previously, such a micro-managing anthropomorphic, drone-buzzing God in the sky has never existed.

Embrace A Spiritual Perspective of God 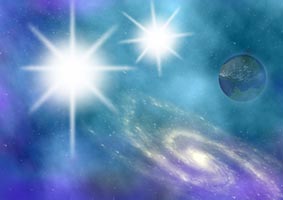 We invite you to reflect on the God of your own understanding. We affirm that your thoughts and insights will have both landing gears as well as wings — as you walk the spiritual path on practical feet!