Avoiding the "Trinity of Control" - A Spiritual Practice 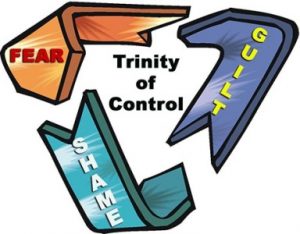 We are aware of the various versions of the Trinity: In traditional faith practices, it is called Father, Son, Holy Spirit. In Unity, the metaphysical interpretation is Mind, Idea, Expression. But were you aware there is also a Trinity of Control that we want to avoid? It consists of Fear, Guilt, and Shame -- and this trinity is used by some faith traditions to coerce members into conformity and submissive behaviors (i.e., tithing, attendance, volunteerism).

(By the way, for those interested in research, science has proven that religions using fear, guilt, and shame actually prevents their practitioners from experiencing more transcendent states of awareness which come from the neocortex area in our brain. There may actually be damage caused in the anterior cingulate in the brain, leading to a loss of interest in other people's concerns and potentially aggressive behavior. (M.R. Milad, G.J. Quirk, R.K. Pitman, S.P. Orr, B. Fischl, and S.L. Rauch, "A role for the human dorsal anterior cingulate cortex in fear expression," Biological Psychiatry, 2007, Aug. 16)

So here is a great spiritual practice to help you avoid this Trinity of Control, and remain in charge of your personal and spiritual behaviors and enrichment. We call it Fear Not!

Here's how:
Throughout the day, simply notice any feelings related to the Trinity of Control: Fear, Guilt, or Shame. As you become aware of your feeling (which is the first step to managing it), apply the FEAR acronym:

One thought on “Spiritual Practice: Fear Not!”