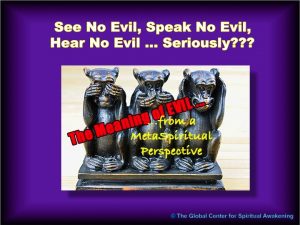 Evil … It’s a concept that can get really confusing! Some New Thought beliefs state “There is no evil.” Yet how can that be true, when we see acts of deviance, corruption, perversion, and wickedness everywhere we turn. Traditional religion thrives on the existence of a dual Power personified as Satan, who is using evil to destroy the earth and win your soul, but where does that fit in with their concept of an all-powerful God? Pantheistic religions like Hinduism, Buddhism and Taoism see evil as ultimately unreal … but it feels pretty real in today’s culture. And then there’s the entertainment industry, who has taken evil to a whole new level. And the whole idea of evil is so relative — what one person sees as evil another may see as good. So where do we plant ourselves as we experience the cynicism and fear that creeps into our awareness when evil rears its ugly head — and how do we use our Truth Principles and Powers to counteract its influence in our own lives and in the world? 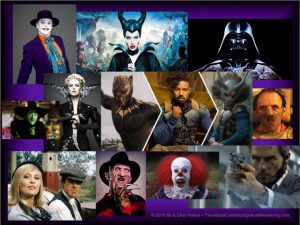 Let’s start by getting real! Admit it! The majority of us have a bit of an obsession with evil. What? Think about it! Hollywood has glamorized the Villain character to a point where the bad guys have their own Facebook pages and Twitter accounts! And now you can even go on line and take surveys to identify which villain style you are!

What Does Religion Say?

Religion has done its part in glamorizing evil as well, bringing it front and center of its most fundamental beliefs. Consider the following belief statements regarding evil from various religions:

Christianity and Catholicism: It’s a battle! “God is warring with Satan for our souls. Satan’s power is strong, but he cannot prevent the establishment and spread of the kingdom of God. What is clear is that in the end, God will have he final victory in Christ Jesus.”

Buddhism: It’s an obstruction! “Evil is whatever harms or obstructs the causes for happiness in this life, a better rebirth, liberation, and complete enlightenment. Illusion is the root of all evil.”

Unity: It’s non-existent! “There is no evil. There is but one power in the universe and that is God — Good. Apparent evils are not entities or things of themselves. They are the apparent absence of good. But God is omnipresent, so the apparent ‘absence of good’ (evil) is unreal.”

We feel that religious dogma is ‘delusion trafficking.’ It perpetuates the belief in original sin; a powerful evil force; an anthropomorphic God meme and a satanic personage called the devil; incurable illnesses; duality; separation between Spirit and matter; etc. Can you see the similarity of the Hollywood hero/villain stories? We are at the mercy of the king of evil, Satan — the ultimate villain, and must rely on God, the Super-Hero of all time, to save us from certain destruction. This dogmatic religious belief is an absurdity that has been perpetuated for far too long. It’s time to suck it up and take responsibility and accountability for the “evil” behaviors of our world.

Here are a few of our favorite quotes related to evil — they get away from the religious mumbo-jumbo and get right down to the reality (in our opinion!): 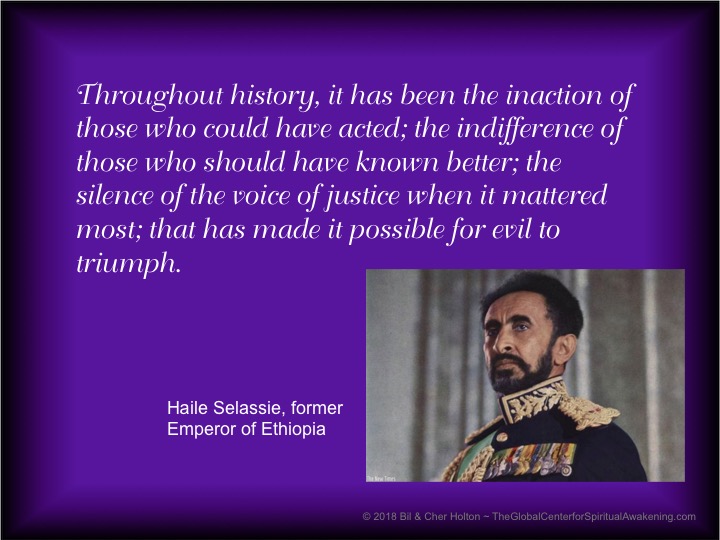 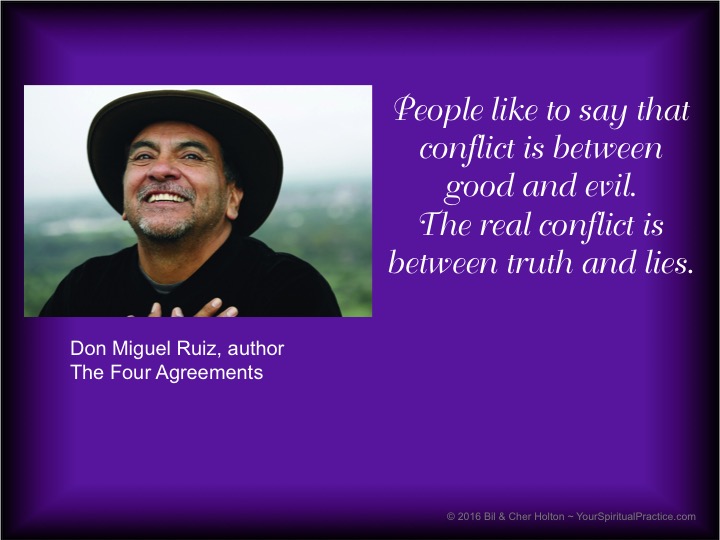 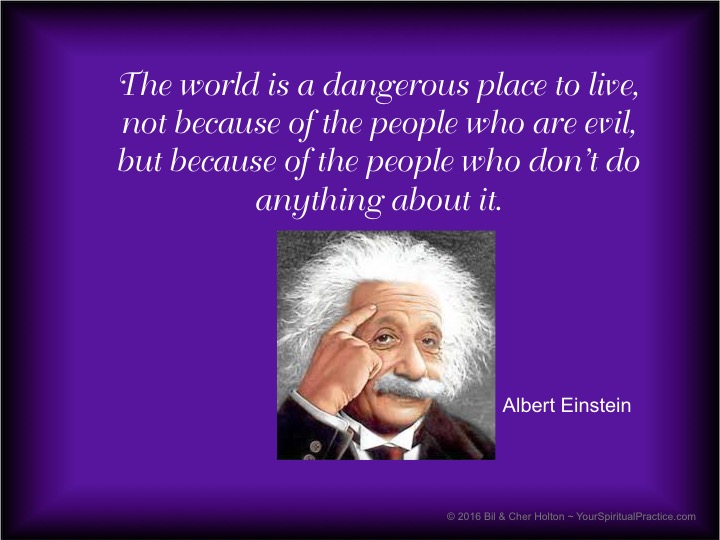 What does Neuroscience say? 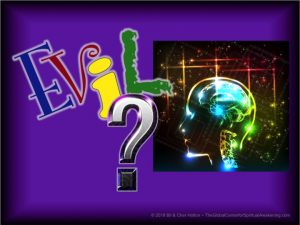 Have the new neuroscientists, brandishing their fMRIs (the ghostly illuminated etchings of the interior structures of the skull), succeeded where their forebears from disciplines ranging from phrenology to psychoanalysis have failed? Have they pinpointed the hidden anomalies in the amygdala, the dysfunctions in the prefrontal lobes, the electrochemical source of impulses that lead to evil acts? And in reducing evil to a purely neurological glitch or malformation in our neural circuitry, in eliminating the element of freely willed conscious choice, are neuroscientists suggesting that they’ve discovered a ‘brain bug’?

Are those who commit acts of cruelty, murder, and torture victims of a faulty part in the head that might fall under a sort of neuro-factory warranty? How much of our evilness is karmic?

Our thought on this: What if there’s an ‘alignment circuit or dimmer switch’ in the brain whose varying ‘degrees’ of strength constitute a spectrum ranging from total 100% alignment with our Divine Nature to ‘zero alignment’? The brain areas this ‘alignment circuit’ would fall under are ‘the medial prefrontal cortex, the inferior frontal gyrus, and both the anterior cingulate sulcus and posterior superior temporal sulcus.’ (We are fans of neuroscience, but we’re also healthy ‘neuroskeptics,’ because we know that correlation doesn’t necessarily equal causation. However, neuroscientists may be on to something, particularly as it relates to our Quantum Self).

Our MetaSpiritual Definition of Evil … and Practical Implications 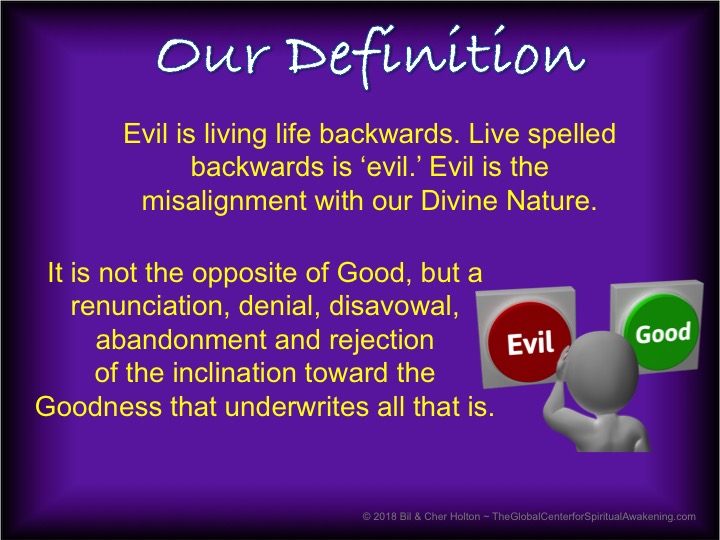 MetaSpiritually, ‘evil’ is living life backwards. It’s mission drift and life purpose one-eightied. It’s refusing to align your human self with your Divine Nature and/or denying your Divine Nature altogether by thinking, being and doing things in direct opposition to your True Spiritual Nature.

What most of humankind calls ‘evil’ is really an ‘energy veil’ or ‘e-veil’ which is the collective consciousness delusion of our supposed separation from our Real Spiritual Self, our Divine Nature. The only ‘separation’ is a consciousness of separation. Eternal goodness underwrites our beingness.

On the physical plane, this ‘energy veil’ is hypnotically perpetuated by the embedded religious theology of our youth which is itself a veiled attempt to hide our Divine Nature. There are ‘evil’ consequences to veiling our divinity. The physical world is filled with violence, wars, fear and a myriad of ‘evils.’ It doesn’t have to be that way, of course. It’s up to us to rent the veil of ‘e-veil.’ And I can assure you that’s not a veiled assertion.

We could extend the metaphor to say that one day humankind will align itself with its innate Divinity (good) and eliminate its penchant for settling for its unenlightened egocentric nature (evil).

The ‘forces of evil’ are our error thoughts, self-aggrandizing choices, and discordant actions that we haven’t outgrown (we call them abominable ailments). MetaSpiritually, there are no dual celestial superpowers. The God meme and the Satan meme are human inventions.

A Model for Action

Here’s our 4-step process to implement, whenever you feel overwhelmed by the effects of the evil you see during your skin school experience. It helps you overcome cynicism, fear, frustration, and helplessness — and acknowledges the “Inside-Out” power you possess as you claim your Core Abilities and use them to take control of what is happening. While we recognize and acknowledge the evil behaviors (and often horrific consequences), we also refuse to give them any power! Here’s your formula that can turn EVIL around, so you can LIVE at the highest level of Consciousness: 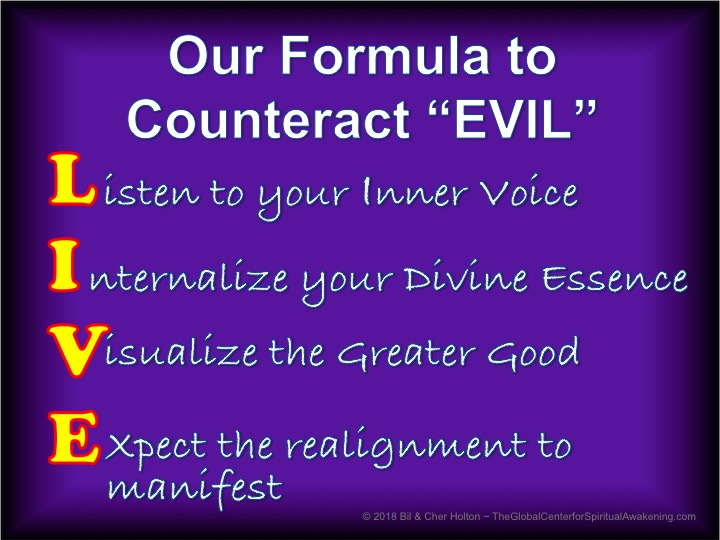 Be Extraordinary … as you walk the spiritual path on practical feet!