What is the White Stone Ceremony All About? 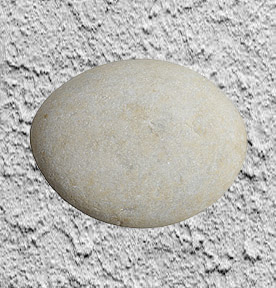 (Preparation: Choose a white stone. You can purchase smooth white stones at any crafts store. You could also find a white stone in a stream or river bed. Hold your chosen stone in your hand as you read through this article and experience the White Stone Ceremony.)

Take a good look at your stone … because what you are about to discover in this brief ritual can change your life … if “you have ears to hear.” That’s what it says in Revelation 2:17. Here’s what it says: “Let anyone who has an ear to hear (in other words, take the cell phones out of your ears) listen to what Spirit is saying … To everyone I will give hidden manna, and I will give a white stone, and on the white stone is written a new name that no one else knows except the one who receives it.”

The Book of Revelation deals in hidden meanings and symbology. This particular verse has to do with renewal and revitalization. It contains the code for what you can be. It was written by the disciple, John, around 95 CE, on the Island of Patmos, where he was in exile.

The MetaSpiritual interpretation of 2:17 is: “As we activate our Intuitive Wisdom by paying attention to high spiritual teachings and making them practical (eat the hidden manna), we tap into the Extraordinary Us, our innate Divine Nature, and become aware of our true Spiritual Divinity (white stone) which transforms our human personality into its higher, more spiritual essence  — the True Nature of who we are (new name).”

It was the key verse in the message John sent to the church at Perganum. And it is the key message we want to share with you. Actually, it is an extension of the message from Isaiah in Chapter 62:2: “and you shall be called a new name.”

The David and Goliath Connection 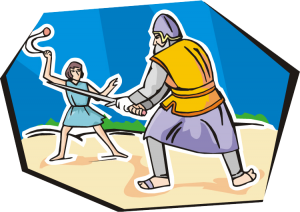 There is also a connection with the story of David and Goliath which is found in I Samuel 17. That story is rich in hidden truths as well. However, there is one passage which is related to the white stone symbolism. It comes from the 49th verse in Chapter17:

“So David put his hand in his Samsonite travel bag, (We’re paraphrasing) took out a stone, slung it,” (We’re not paraphrasing now). Slung it. (Sounds like N.C. slang doesn’t it), “and struck the Philistine on his forehead. The stone sank into his forehead” (That probably hurt), “and he fell face down on the ground” (which is what anyone would do with a stone between their eyes.)

We’re going to fast forward now to Revelation and then rewind to David and Goliath again to explain the significance of the stones, the manna, and the reference to the new name.

Look again at the white stone you’re holding. In the time of Yeshua ben Yosef (Jesus), when someone served time in prison, they were given a white stone when they were released. It signified freedom from bondage. It meant a new start. It was evidence they had overcome a limiting condition.

The Revelation account mentions hidden manna. That’s a reference to the Old Testament story of the manna in the wilderness which was sent to the Israelites and Moses each day for their daily bread when they fled Egypt..

It’s important for you to believe that because it really is the truth of who you are. You are Divine Consciousness expressing as a Light Being wrapped in human clothing. You are hard-wired for freedom and independence and health and joy and prosperity. It’s in your spiritual DNA.

In the Hebrew Testament story of David and Goliath here’s the MetaSpiritual perspective of David’s victory over Goliath:

The Purpose of the White Stone

Let’s jump back to the Revelation account again. It says that “on the white stone is written a new name”… and that “no one knows the name except the one that receives it.”

The name written on the stone is your innate Divine Nature (‘is given to you’) by right of consciousness. No one else can have that same ‘divine genealogy.’ The white stone represents your I am-ness as the Eternal Presence in physicality. You are the unique expression of that I am-ness. That’s why no one can have the name (nature of) of your spiritual identity (your Spiritual IP Address).

When you surrender to the truth of you, you become aware of who you really are (assume a new nature [name]). A name change means there’s a change in your awareness. You are promised a ‘new’ nature when you claim your divinity. You are promised freedom and independence from what you have been.

Take one more look at your white stone. Your new level of awareness (name) is written on it. Can you see it? It’s there. Look carefully. You’re going to see your true name, shortly. It’s your true essence. It’s the name you came to fulfill in this earth experience. It’s your spiritual destiny. It underwrites your ability to walk a positive, practical, progressive spiritual path.

Take a good look at the stone you are holding … because what you are about to discover in this brief ritual can change your life. As we’ve already mentioned, it represents your awareness of your innate Divinity. If you’re willing to claim your oneness with One Reality the Ground of All Beingness, repeat this affirmation:

Record the instructions below so you can listen to your own voice guiding you through this sacred ritual,  or have someone read them to you. You may want to have soft meditative music playing in the background.

Reflect on the name that came to you and on the significance of the whole white stone exercise. Place your stone in a prominent location so you’ll remind yourself of your Extraordinary Divine Nature.

You may want to repeat this spiritual practice each year. You can use it as a personal identity barometer to measure your spiritual growth, to assess whether the new you is the same as the you last year or the you who has become something different.

One thought on “White Stone”